The ITEA 2 project OPEES stood at the inception of two important trends: open collaboration with open source in industry and open source tools for model-based systems engineering (MBSE). Neither of these trends were well developed in 2009, but almost 10 years later, and with acceleration through the OPEES project, we benefit from both good open source MBSE tools and many open collaboration initiatives in industry. OPEES was both a pioneer and a catalyst in this evolution.

The ITEA 2 OPEES project was created to develop an open source platform for software tools to support engineering technologies for embedded systems and to secure the competitiveness and development of the European software industry. One key requirement, brought by Airbus, was to be able to use tools for more than 50 years, during the complete lifetime and duration of support of an aircraft programme. During the project that ended in 2012, the 28 partners not only developed and significantly improved existing open source projects such as Frama-C, Eclipse Papyrus and others, but also defined the governance and the structure for a sustainable organisation to gather an ecosystem of both developers and users. 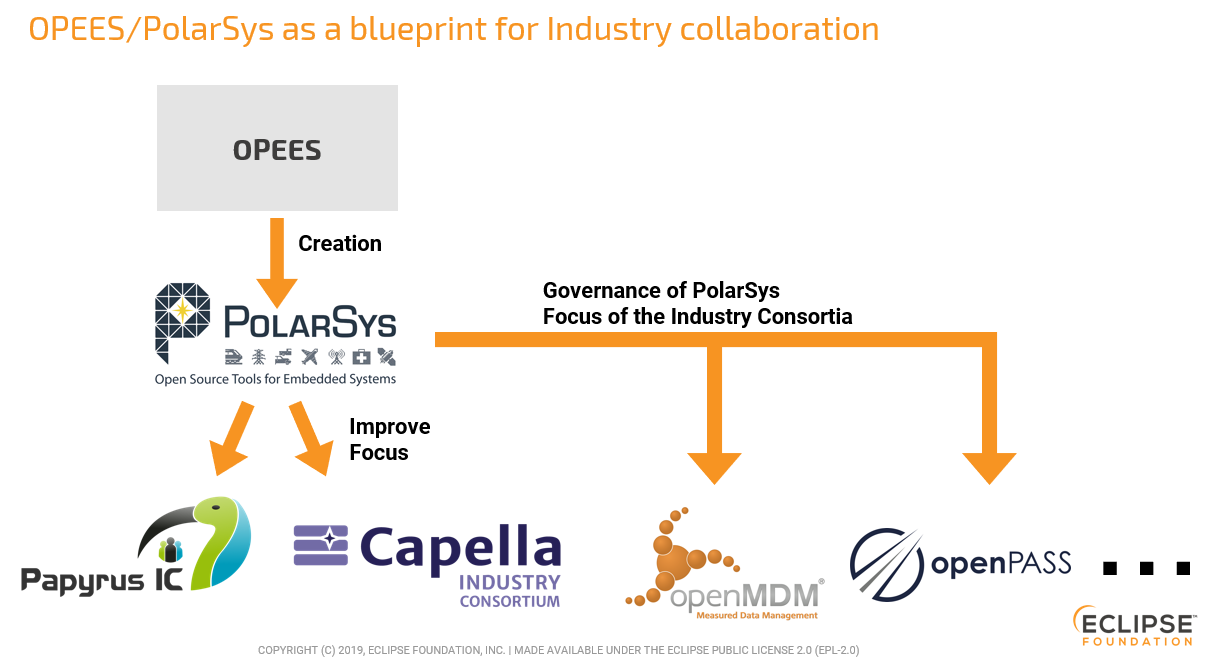 In 2012, the first Working Group was created at the Eclipse Foundation. The Eclipse Foundation provides a global community of individuals and organisations with a mature, scalable and commercially-friendly environment for open source software collaboration and innovation. With actors from industrial sectors such as aerospace, transport and energy, this PolarSys Working Group quickly reached a larger community by recruiting both new members and new technologies. It consisted of 25 members including some OPEES partners such as Airbus, CEA and Thales as members of the Steering Committee.

When Airbus reached out to the Eclipse Foundation in 2007, they explained that they needed to setup an organisation similar to the Eclipse Foundation, but for industry collaboration instead of collaboration between software vendors. Companies like Airbus, Thales, Ericsson and others, need tools that have properties that fit well with the freedoms offered by open source: to use, study, improve and share software. In industry terms this means the capability to adapt the software to a specific industry context, to support the software for the long term (>10 years) or even the very long term (>50 years), to ease deployment across the supply chain and to ease interoperability through open standards.

Innovation and collaboration in the MBSE tooling ecosystem

Three of the noteworthy projects that evolved inside PolarSys are Papyrus, Capella and OpenCert.

Papyrus had been established as an Eclipse project in 2008, prior to the launch of the OPEES project. Aspects of project development were brought under the umbrella of OPEES, and after the project, Papyrus development continued via the collaboration of several industrials led by Ericsson. The main rationale behind this support was the need for an industrial platform supporting UML, that was customisable and extensible to allow innovation and collaboration. And again, open source technologies seemed to be superior to proprietary closed tools in terms of extensibility and creation of an ecosystem.

Capella, an MBSE tool based on the Arcadia methodology, was launched in the late 2006 as an internal tool at Thales. By 2013, however, and thanks to their participation in OPEES, Thales realised that the closed nature of the tooling was an obstacle to larger deployment, especially with an extended supply chain, because subcontractors did not have access to the tool due to its proprietary nature. In 2014, the Capella open source project was created in PolarSys with the goals of lowering the barriers to use and of fostering collaboration. In subsequent years, Capella has been applied in industries such as Aerospace, Automotive, Defence, Energy and Railway. A few years later, there are not only thousands of users of Capella on hundreds of projects inside Thales, but also more than a hundred companies worldwide using it, including European organisations such as the European Space Agency, Ariane Group, Rolls Royce and Siemens, that rely on Capella in their System Modelling Workbench product. Finally, it supports an ecosystem of European SMEs, like Obeo and Artal, that sell packaged products, support and expertise on top of Capella not only in Europe, but also in North America and in China.

A blueprint for industry collaboration in open source

The principles for industry collaboration through open source, as developed in OPEES, continue to be used in a range of successful Working Groups hosted by the Eclipse Foundation. This governance model has proven to be adaptable in many different contexts and industries, with goals ranging from simple collaboration amongst stakeholders to more advanced collaboration through focused development co-funding.

Open source as a catalyst for dissemination

Another aspect originating in OPEES is the use of Open source as a catalyst for the dissemination of research results. After this approach was pioneered by OPEES at Eclipse, the AMASS project followed with the open source OpenCert, along with others such as Amalthea4public and Eclipse APP4MC, APPSTACLE and Eclipse Kuksa. All use the same approach that leverages open source for the dissemination and exploitation of research results and encourages the development and sustainability of these technology communities.

OpenCert was created in late 2015 by Tecnalia, another partner of the OPEES project, and other partners from the OpenCOSS (FP7) and AMASS (ECSEL) projects. The goal of OpenCert was to create an open source platform for safety and security assurance project management, assurance case management and evidence management while integrating other projects like Papyrus and CHESS for System Design and Analysis. This project focused on model-based safety and security engineering conformant to ISO 26262, ECSS 40 and other standards. Following the pattern originating with OPEES, the OpenCert stakeholders created an ecosystem to gather research institutes, software vendors, and users around the results of several research projects.

The structures and initiatives originating with OPEES continue to be successful in other European industries. Industries such as Automotive are benefiting from collaboration on technological innovations to meet specific challenges common to the entire industry and from continuous, sustainable innovation through open source. This model allows industrials to continue to compete in other areas while leveraging common open source assets. Two good examples of initiatives inspired by OPEES are: OpenMDM, a platform for the management of diagnostic data in automotive, and OpenPaas, a platform for virtual testing of ADAS. These two Working Groups gather, next to all the German automotive OEMs, also several international automotive OEMs and several Tier 1s to collaborate on industry open source platforms. Engineering teams welcome open source because of not only the advantages of using a common base, but also the enrichment of the work environment and worldwide visibility and collaboration. In these industries, it could be said that the OPEES project has resulted in outcomes that have sustained their benefits well after the end of the project.