If I have to summarise the most important follow-up to the ITEA projects that Indra has conducted in the past, I would have to mention two important topics that were tackled during these projects (Nemo&Coded, Imponet and DiCoMa) which have proven to be extremely important over time: big data technologies and real-time data integration platforms.

With respect to Big Data technologies, they were investigated and used to a larger or lesser extent in all these projects, applying them to the energy domain at a time when few people or organisations were considering it. A special mention should be given to Imponet, as we foresaw the need to use these technologies for handling and processing large amounts of data coming from the Smart Meter deployments that were being initiated at the end of the last decade. In this sense, we included this topic in the scope of Imponet and conducted extensive research on the subject, implementing a significant number of use cases related to Meter Data Management (MDM). The results were extremely encouraging and it gave us a head start on the competition, especially from the US, in developing an MDM product that was largely based on the utilisation of open source big data technologies. Time proved that our prediction was very accurate, as ever since there has been an increase in the number of countries from different geographical areas around the world that have passed legislation and implemented regulation for the open access to end customer energy data. The large amounts of data provided by these Smart Meter deployments make it impossible to comply with this legislation/ regulation, unless these technologies are employed for the acquisition and processing of this information.

In the case of the exploitation of big data technologies by Indra, there have been numerous products in the energy domain that either have been developed or have been enhanced by the use of these techniques and technologies, such as the aforementioned MDM. Because of its importance and significance, we should point out that the Web Portal for Residential Customer Meter Data implemented by Gas Natutal Fenosa, the third largest utility company in Spain, was developed by Indra reusing part of the results produced by the Imponet project and making extensive use of the experience and expertise accumulated during this project. This portal is being deployed for the overall customer base of the company, which is in excess of 3 million customers, representing a sizable portion of the total Spanish market. In the future, Gas Natural Fenosa will be rolling out this platform for other market segments and is foreseeing a future deployment in the companies that it owns and operates in other parts of the world, mainly in South America. The combined number of customers be served by this portal will then reach over 20 million worldwide, just for this company alone.

In the case of real-time integration platforms, Indra predicted the need for these kinds of tools in the energy domain for implementing the (back then) novel concept of the Smart Grid based on its extensive knowledge and experience in implementing similar solutions in other areas and domains, such as air traffic control (ATC), defence and railway operations.

Compared to the current electricity networks, designed to operate according to a unidirectional flow, future Smart Grids will enable the integration of distributed bi-directional load flow, enabled by the wide application of information technology devices. This radical change in the way of generating, transporting, distributing and consuming energy creates many challenges that affect the entire business model around electricity. One of these challenges is the transformation of the current monitor and control chart from a Central Control Centre (where the intelligence required to manage network infrastructures is provided by human operators and control systems) into a management architecture based on distributed intelligent devices capable of performing enough to perform complex event processing and simulations as well as to execute high-level technical and business rules. This challenge will transform the network operation process from a top-down approach to a distributed control perspective, providing new services to final users, optimising the use of energy resources and gaining significant knowledge on the generation and demand trends in these very dynamic and volatile environments.

As Indra saw it, these new requirements demand an electric grid with "distributed intelligence" that has the potential to significantly increase the operational efficiencies of the electric power system resulting in benefits realisation through additional cost savings. Consequently, the modern grid must be able to adapt from proprietary, isolated and single-function (a.k.a. siloed) centralised management systems to a multi-function and integrated distributed grid management system that will simultaneously employ both decentralised and centralised systems in a highly coordinated manner. In Indra's view, this distributed system should support the ability to quickly, reliably, and securely collect, organise, and analyse large volumes of data and develop actionable information without overwhelming the centralised systems. An information system consisting of a hybrid of both centralised and decentralised processing systems can help provide this functionality. This distributed information system will help with processing, resolving, and delivering the large amount of actionable data needed to effectively manage and control the electric power system. In addition, it will be able to support immediate near real-time decision making based on locally available information and also deliver appropriate trending and other actionable information to other information systems. Distributed intelligence will allow the dynamic analysis of information and the relaying or sharing of important information, while discarding redundant or non-important information. 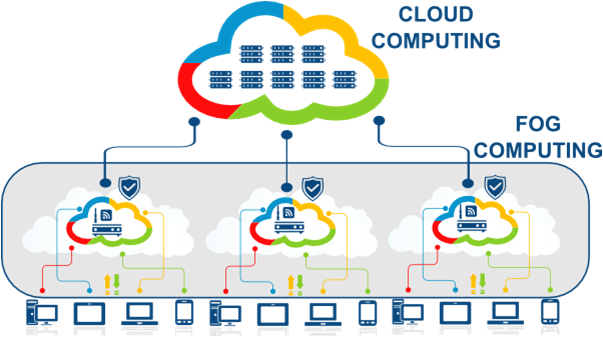 In general, the energy domain is starting to understand that this future scenario will be realised through the deployment of real-time integration platforms that are inherently distributed and based on loosely coupled architectures into what is increasingly being called Open FMB (Field Message Buses). From this point of view, Indra's vision was ahead of the time, as it supported and encouraged this conceptual vision which is clearly aligned with the growing global trend towards the computing paradigm supported by the processing of information in the field nodes where the data is acquired, in what is becoming known as "edge computing", or alternatively "fog computing". This is the paradigm behind much of the current effort on the IoT (Internet of Things).

This paradigm is based on distributed computing nodes conforming a layer of intelligence at the edge of the network to process some analytics and take some decisions there, instead of processing everything in the cloud. In this sense, this concept represents an intermediate layer between the sensors and devices in the field and the computing capacity in the cloud, as shown in the graph. Regarding the energy domain, the implementation of this computing paradigm in the near future will imply that a substantial part of the decision making will take place at different levels of the electric grid topology by independent but coordinated nodes.

In the case of Indra, the development of this kind of platform for the energy domain was in its road map since 2008, and part of the development of such a platform was included in the scope of the projects Nemo&Coded, Imponet and DiCoMa. The resulting product, iSPEED, has proven to be first of its kind and is currently being implemented in utility companies from different parts of the world, such as Elektro in Brazil, or generating interest in organisations such as NRECA (National Rural Electric Organisation) or the SGIP (Smart Grid Interoperability Panel) in the USA, among others. For Elektro, the iSPEED platform will be used for the monitoring and control of the entire distribution network, which is comprised of more than 170,000 transformers and serves more than 2.4 million customers in a rural and urban hybrid environment. Elektro is a subsidiary of Iberdrola and the holding company is closely monitoring the results of this implementation project with the idea of extending the use of iSPEED to other subsidiaries and to Iberdrola itself. In this future short-term scenario, the combined number of customers for the Iberdrola group indirectly served by this platform, by monitoring and controlling the distribution network servicing them, will be in excess of 25 million worldwide.