A consortium of 32 organisation from 6 countries has come together to advance the workings of virtual worlds. By creating a standard interface, the METAVERSE1 project made it possible for information to be shared between different virtual worlds and the real world and has led to the development of an international standard. The technology will be used in industries such as real estate and tourism.

Overcoming the isolation of virtual worlds and simulators has enabled the METAVERSE1 project to drive new international standards, create a new ecosystem and find immediate commercial uses. A diverse group of organisations formed a consortium and with assistance from EUREKA obtained government funding for almost half of this highly successful project. With immediate commercial value and the potential for a wide range of further developments in the long-term, METAVERSE1 is unlocking virtual worlds and has the potential to improve the real world for many people.

To some people, virtual worlds such as Second Life offer harmless escapism and fun, to others an opportunity to make money. Others again, view the emergence of virtual worlds as a way to help businesses and people to interact with their environment and each other in new ways.

The virtual worlds industry is far larger than consumer games, with software and applications available for real world training and simulation facilities and a wide number of specialist tasks that require remote work. The majority of these systems do not allow information to be shared between them, partly because of competing business interests and partly because the systems were developed separately with no requirement to interact. It could be argued that this isolation has held back the development of the sector.

Work in this area had been conducted in Europe and Asia to develop interactive entertainment for Japanese and Korean consumers to enhance the experience in consumer electronics and theme parks. With Europe now leading the way, the technology has applications in tourism, real estate, town planning, the next generation of video conferencing and much more. The intellectual model behind this development has been led by a Tel-Aviv university professor Yesha Sivan, from Israel.

Through meticulous planning and preparation, Yesha Sivan and Jean Gelissen from Phillips Research, worked to make the existing virtual worlds stakeholders understand their concept and recognise them as being no threat to their businesses. This work enabled far greater collaboration for the project and full cooperation from the existing operators. As Jean Gelissen says, "The project was designed so that it was achievable"

An open source version of Second Life, OpenSim, was used as a platform to enable participants to model environments and connect to other infrastructure. By providing lots of training and hands on experience the project has brought much of the virtual worlds community together.

By helping to bring participants together and enabling applications for government funding, EUREKA played a crucial early role: 45% of the total 19.4 million euro budget was provided through government funding.

Some of the project participants entered with a clear idea of what they might achieve, leading to a number of immediate commercial uses upon completion. For example, Alcatel Lucent in Belgium are using the technology to revolutionise video conferencing. By combining video conferencing with virtual world technology, a much more real and interactive meeting will be possible, enabling participants to move around, change seats or join different meetings. French partners are putting the technology to use by creating interactive museum tours. In The Netherlands the town planning consultation process for large redevelopment projects is testing how virtual tours can improve the input of local residents.

An even more ambitious use has been to model part of the city of Las Palmas de Gran Canaria by a large Spanish consortium led by Innovalia. By proving to potential tourists that Gran Canaria island is much more than just a beach before their trip, the technology is being used to pre-sell the benefits of being on the island and seeing more of it during a visit. Visitors are able to plan their bookings in advance and then relive the experience afterwards by using their own photographs and videos taken on location inside the virtual tour.

Jean Gelissen is hopeful about the potential opportunities that the creation of a new ecosystem can bring. It is this flexibility that lead the standardisation to be called "Interchange with virtual worlds". The international standard, known as MPEG-V which was published in January 2011 by ISO/IEC, open the door to many other industries and the innovations they may generate. He is particularly excited about the potential for assisted living that might come from robotic aids for the disabled and greater connections between the elderly and their carers. These developments could be aided by biosensors, something that the gaming industry is very keen to see developed further and would improve interactivity still further. 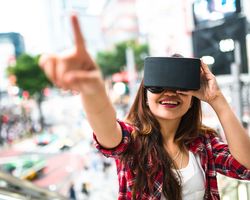