SparxSystems Central Europe (Sparx CE) is an Austrian SME and consortium member of the ITEA COMPACT project that aims to enable fast and efficient IoT software development by providing novel solutions for the application-specific and customer-oriented realisation of ultra-small IoT nodes. In a nutshell, this is the arena in which SparxCE operates. Peter Lieber’s SME is, in many ways, an example of Austria’s brave new IT world, as both a beneficiary of its government’s commitment to IT and a contributor to the growing impact SMEs are having in this environment.

Founded in 2004 as a retail company, Sparx CE originally operated as an independent sister of an Australian company to resell its Enterprise Architect modelling platform in Europe, Peter Lieber explains. “Being a modelling platform – like UML (Unified Modelling Language), MDA (Model-Driven Architecture), and so on – means that it can be expanded – defining a new standard, a new language, a new methodology. We currently provide 60 modelling languages out of the box and our focus is to be standard-oriented by providing support through tools. A standard is a written document governing a specific domain, but it is only helpful with tools. So, it’s this ‘tooling’ that our company provides. A fool with a tool is still a fool, but a genius without a tool is not productive.”

“And since software is everywhere, so are we. We are not bound by domains or sectors. Of course, there are some areas that are more driven than others by standards, like the automation and aviation industries where safety is critical. Which means that modelling the architecture is key. In fact, standardisation and legislation require the modelling of your ecosystem. Whether that’s a car or financial institution, you need to have an abstracted visualisation of the processes and operations of the system that you’re running.”

Modelling and architecture for everyone

“Originally we came in from the software side of things but nowadays we are additionally focused on cyber physical systems and enterprise architecture. The funny thing is that our product was called Enterprise Architect long before it became the term as it is known today. So, I guess we can claim to be a bit of a pioneer. We have over 160 partners and 750,000 users worldwide, and the top 500 companies worldwide have at least one of our licences. We maintain a very competitive pricing model because we believe that modelling or an architecture tool should be available to any user, not only the architects. We want a product with a high degree of functionality and availability in the market, with access to new features, updates, etc.”


“It stands to reason,” says Peter, “that an industry in which safety is vital will have higher priority be for the modelling tools that we supply. But we are also seeing a trend in domains like healthcare and embedded devices whereby modelling is becoming increasingly indispensable. Other branches such as banking and insurance, whose challenges and issues are completely different, are also emerging fast in this respect.”

A scalable, easily deployed, multiuser environment, Enterprise Architect integrates team members from all sections and all phases of a product’s (or system's) development and maintenance lifecycle, providing significant benefits from built-in collaboration and inherent information sharing. A single repository for business analysts, software architects, developers, project managers, testers, roll-out and support staff. A 'unified' view of a complex system having many viewpoints and many possible subsystems. Shared models can be accessed easily and securely by remote team members with Enterprise Architect's ProCloud Server. 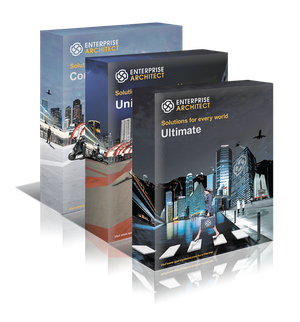 “Some people say that software innovation is an endless cycle of inventing and reinventing wheels. Take AI in the 70s – it was a hot topic then and is a hot topic now, but in reality the difference is that 50 years ago it was a fantasy or a possibility but now it’s a reality. And while things may appear simpler, in fact the complexity is increasing. And that’s where innovation is needed because you cannot deal with the problems of today using the methodologies of yesterday. So, it’s not so much a matter of reinventing wheels but inventing wheels much faster. Nowadays we have a lot more power than we had before – in terms of memory, speed, performance, image interpretation. There’s almost no limit to what we can imagine. It’s a matter of complexity. Everything is connected. We have to consider issues in a much more complex whole. We have to predict the unknown.” The complexity is increased by the essential difference between IT people and software people, Peter suggests. “The IT guys want security, want to avoid endangering the system. Software people are more visionary – strive for newer, better features. So just adding a bit of spice to the pot of ingredients we already have to deal with, this ‘conflict’ also has to be resolved. Myself, I come down on the visionary side.”

Peter underlines the need for innovation to take place on a large scale. “Innovation is meaningless unless it gets to market. And that’s where public funding has a role to play. In the EU’s Framework 7 tsunami recognition system project geared towards predicting a potential tsunami, I realised how fruitful the collaboration between different European partners can be. It whetted my appetite. In Austria we have the FFG, the Austrian Research Promotion Agency that provides a palette of instruments for collaborative research but you really have to make your case for software innovation since it is often regarded as a bit of an ‘invisible’ miracle potion in the mix. When the ITEA 3 COMPACT project came along, this seemed like the ideal higher-level project to become involved in. ITEA is certainly an environment to be in if you want to be innovative in the software domain. And we have learned a lot from being together with different partners, from software to hardware and from researchers to suppliers. Being able to see through the eyes of others as well as building good relationships and friendships. And getting a success story to market can act as a springboard for actual exploitation with a real product with real impact. We look forward to that!”

Harvesting the fruits of one’s labours

Setting a world standard in gaming for special populations

A go-to-market acceleration platform for ICT

Where fantasy creates a new reality

Continuing to focus on customer orientation

A vision of standards and state of play